Thanks to leads from other birders on the u-mich birders e-mail list, I have been inspired to make the best of this cold month by seeking out the unusual winged winter visitor. 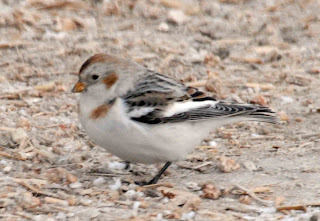 I found this picture on the internet, unattributed.

First the snow bunting: I had previously seen this species only once before, and that was in the famously frigid area near Eli, Minnesota. Turns out I didn’t have to go that far. There are several spots in Washtenaw County where you can reliably find them. Just find out where the horned larks are congregating. And where might that be? How about the northeast corner of Willow Run Airport in the field behind the security fence. It’s quite enjoyable to watch the large flocks of larks from within the comfort of your car. Look for a bird with white wingbars, and you’ve likely spotted the lovely snow bunting. I can give you more specific directions if you e-mail me. As I sit staring at the birds with my binoculars — in the direction of the airport — I wonder when someone from homeland security is going to pull me over to question my suspicious activities.

It look me three tries to Willow Run to find the second species that was on my list: the lapland longspur. This bird also hangs with the larks and buntings but it is in smaller numbers and is a little harder to pick out. It was a new one for me.

Most people who take an interest in those things that are ‘out-of-doors’ (what a quaint expression!) are familiar with the cedar waxwings — they will strip the fruit from cherries and amelanchiers in no time, and they put on a great aerial display in summer as they dart from trees and catch insects over the Huron River. Uncommon in our area is the bohemian waxwing. Someone spotted a flock of them at Four Mile Lake near Chelsea (it was dead quiet when I visited). And several people reported seeing a large flock at Brighton Recreation Area. On my second try into that area, I found them: approximately 57 individuals, plumper and bigger than cedars waxwings and grey on the belly instead of yellowish. 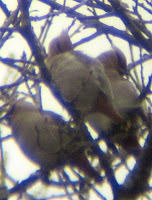 Yes, they were at a bit of a distance and the skies were grey and the lighting was poor so they looked mostly like grey blobby molten Christmas ornaments. But they were making a waxwing sound, and their identity was certain. In fact here’s a snapshot taken (not by me) with a cheap camera through a cheap spotting scope moments before the flock took off. FYI, the ‘reddish’ color of the undersides of the tail is diagnostic.

Some other species that have been spotted “locally” in recent days: short-eared owl, northern shrike, and townsend’s solitaire.

GreenStreet Tree Care in Ann Arbor, Michigan has four ISA Certified Arborists on staff. Contact us for a free estimate from our tree care experts.

Get landscape help and help your community. Learn more at lotusgardenscapes.com  Get the help you need